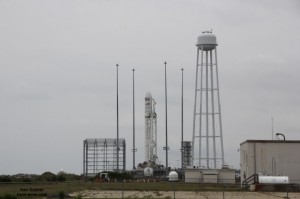 The rocked compared to the water station

It is finally happened. Orbital Sciences successfully launched a rocket from Wallops on July 13, 2014 at 12:52 PM.

The launch originally planned to be in May, then in June. But it was delayed several times due to various issues. Actually severe thunderstorms that hit the Wallops area last week, affected the planned operational schedule and Orbital decided to postpone the Orb-2 mission for an additional day (oh, man) in order to assure normal launch operations.

And now it is on way to the International Space Station (ISS).

It is called Orb-2 mission or in full Orbital Sciences CRS Flight 2. It is the third flight conducted by the Orbital Sciences (a private company) to the International Space Station (ISS). According to the company tradition, the Cygnus spacecraft has been named the Janice Voss after the NASA astronaut and Orbital employee who passed away on February 6, 2012.